Welcome to Power Wheels Wiring 101! Before you hurl yourself headfirst into any Power Wheels upgrade, you need to understand the electric system. Though it may seem intimidating, when it comes to wiring, Power Wheels is about as simple as it gets!

Bookmark this page to reference for your Power Wheels DIY projects. Being familiar with the wiring diagram of your Power Wheels can help you do many things. Repairing a wire, replacing the motors, upgrading the battery, and more are easier tasks when the wiring circuit is understood.

Remember that though it’s all under the same brand umbrella, the different models of cars may vary in their wiring depending on their design and functionality. This guide will provide the basic wiring diagram of the most common Power Wheels.

Before we begin, let’s take a moment to define all the components we will be discussing in this guide. Included below are photos of stock parts so you can easily reference them to your Power Wheels model. Some items may vary (like the inclusion of a hi/lo switch or not), but each part will look at least similar to that pictured!

Battery: The Power Wheels vehicle receives its power from the battery. Within this container, chemical energy is transformed into electric energy and will travel via the wires of the electric circuits described in this guide.

See the below example of a 6V Power Wheels battery with wires:

Motor: mechanism for transmitting battery power into spinning the wheels. It is powered by electricity supplied from the battery, which is transmitted into motive power.

See the below example of a gearbox and motor assembly. The motor is the metal cylinder with the wires attached. 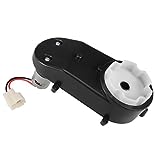 Throttle switch: a three-pin switch connection, usually connected to the accelerator pedal. In other words, your GO pedal!

See the below example of a plunger accelerator (the pedal sits on top to depress the plunger): 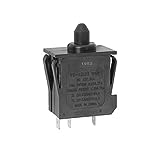 Resistor: device for softening the brake, connected to the negative terminal of the battery. Instead of a braking pedal, Power Wheels utilizes this resistor to short the motor when the accelerator is released, thus slowing or stopping the vehicle.

See the below example of a resistor device:

The Power Wheels shifter assembly encompasses both of the following six-pin switches or just the Forward/reverse switch in some models:

See the below example of the shifter assembly with the two six-pin switches:

Fuse: small device connected to the positive terminal of the battery that provides a break in circuit to protect the battery from overloading.

See the below example of a basic inline fuse: 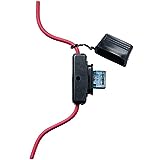 Parallel wiring: Allows the full battery voltage to provide power to the motors.

Series wiring: Allows the battery voltage to be divided between the motors.

How a Power Wheels Car Works

You will find the battery on your Power Wheels either under the hood or in the car’s rear compartment. The battery transfers power via wiring to the car’s motors, which transmit this energy from power into rotation. The motors are connected to gearboxes that accept the spinning power of the motor and transfer it to the wheels to create acceleration and deceleration.

Within this electrical circuit is a toggle (a forward/reverse switch) switch, which allows the wires to reverse their polarity and cause reverse spinning on the wheels, to drive in reverse.

Some cars also feature a Hi/Low switch, allowing the car to go faster or slower.

From this basic understanding, you can move on to studying the wiring diagrams below to further explore how a Power Wheels car functions.

The following diagrams represent various Power Wheels model wiring setups. From the basic single motor 6v to the standard dual-motor models, you can see that the wiring stays relatively the same while accommodating a few extra features.

Power Wheels with a Single Motor

The single motor vehicles are little 6V battery cars designed by Power Wheels and are your starter versions for tiny tots. These cars can go forwards or backward and do not usually feature hi/low switches. They are wired in parallel.

A car of this design will include the following wiring components:

From the battery’s positive terminal, the inline fuse is connected, then attached to the top pin of the three-pin throttle.

Now, you will also notice the yellow lines on the toggle switch in the diagram below. These represent the crossed wires – top right to bottom left and top left to bottom right. At this point, these loops reverse the polarity to the motor, allowing the wheels to spin backward and move the car in reverse.

This setup is considered parallel as the battery ultimately links its positive and negative terminals to the single motors terminals. Once we add a second motor, as described in the next section, we move to a series setup.

Most Power Wheels cars include two motors and are wired in series. This category includes the ever-popular Jeeps that come in many varieties of branding and styles. The main distinction in this wiring diagram is the inclusion of the High/Low switch, additional motor, and wiring in series. Refer to the diagram below!

A car of this design will include the following wiring components:

The above setup is wired in series – do you notice how the positive terminals of the two motors connect to each other via the hi/lo switch? Whereas the negative terminals of the motors are routed towards the battery, creating a loop-like circuit, versus the direct connection seen in the parallel wiring.

Congratulations! You’ve graduated from Power Wheels Wiring 101! Up next, can you tackle a Power Wheels upgrade DIY? Check out one of our many articles on upgrading various aspects of your child’s ride-on car, from the battery to the motor to the tires! This diagram will also come in handy when troubleshooting your electric riding vehicle.

With this handy wiring guide, you’ll be ready to plug into any project, whether a simple repair or a sweet upgrade. You may even consider printing out the diagram related to your Power Wheels model to keep for a quick reference. And remember, when in doubt, seek professional help!

Lisa is a working mom at home from the Pacific Northwest. She is an avid craft-dabbler, with a cabinet full of knitting needles, whittling tools, and a bubbling sourdough starter. When she isn’t busy sewing or baking, you can find her outside running trails or chasing her kiddo through her backyard pines.
Scroll to Top